Chip Sales Fall for Fifth Straight Month in May 2019. But there’s still hope…

Global semiconductor sales declined on an annual basis for the fifth straight month in May but increased modestly on a sequential basis as the chip industry downturn continued amid an ongoing trade war between the U.S. and China.

Chip sales fell to $33.1 billion in May, down 14.6% from the May 2018 total of $38.7 billion, according to the World Semiconductor Trade Statistics (WSTS), an organization of 45 major semiconductor industry member companies who pool sales data. Sales did improve by 1.9% compared to April’s total of $32.5 billion.

“Global semiconductor sales fell well short of last year’s monthly total in May, marking the fifth straight month of negative sales growth on a year-to-year basis,” said John Neuffer, president and CEO of the Semiconductor Industry Association, in a press statement. “On a month-to-month basis, global sales increased modestly and sales into the Americas increased for the first time in seven months, although year-to-year sales into the Americas were down substantially.”

Sales declined on a year-to-year basis across all regions of the world, according to WSTS. On a month-to-month basis, sales increased in China, the Americas, and Japan but fell in all other regions.

The semiconductor industry is widely expected to contract in 2019 after three straight years of market expansion as the memory boom that drove much of the growth in recent years has turned to bust and the world’s two largest economies continue to impose tariffs on each other’s exports. The WSTS is currently forecasting that global semiconductor sales will decline 12.1% to about $412 billion in 2019. 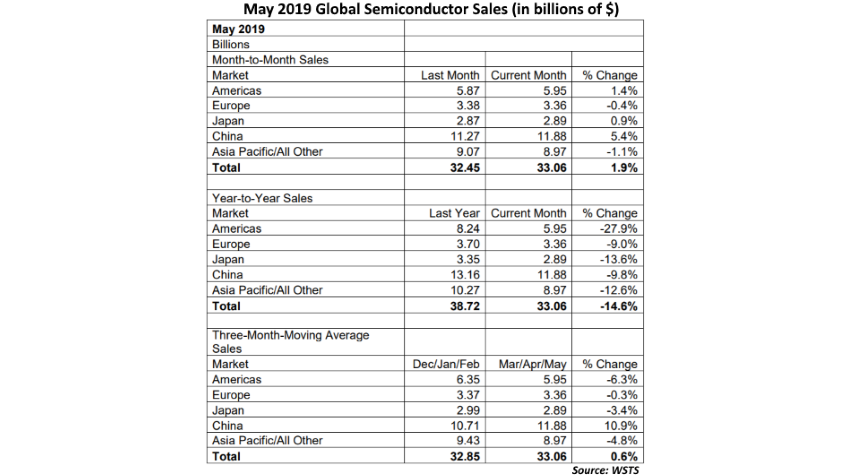